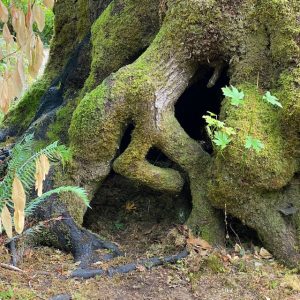 I had a great experience today in my own “healing process”.

I have been recently moved to tackle (again) a tricky knee I’ve been struggling with since about the age of 13 or 14. For the past year or so it has kept me from riding my bike and doing my yoga, as both activities created an all-day ache in both my knee and my sacroiliac joint which was distracting at best and truly painful at worst. I had arthroscopic surgery as a high school junior, I did Physical Therapy exercises both originally and again a few years ago, I tried to strengthen my core with Pilates, I have had excellent bodywork, and thought really hard about what the freaking deal was, with no real success.

Over the past few months I have been working with Michael Hahn who is an excellent Visceral Manipulation therapist here in Seattle. His work with the subtle connections of the finer fascial structures of my body have been fascinating and helpful– an extremely gentle session in my psoas/ilacus on that pesky right side felt like it was the beginning of a new possibility for that leg/hip/knee.

Michael encouraged me to go see Sue Knowles at Movement Systems Physical Therapy, and I felt ready, so I did.

I always enjoy a good opportunity to learn something new from a practitioner with a different skill set. With the first session, I got to try some new ways of standing and walking that were awkward, but interesting. I could also feel that what she was asking me to do wasn’t completely possible for my body– I knew enough to know I wasn’t doing it exactly right, but I did the best I could, and brought questions to my session today. She could see the difficulty I was having and after some testing and walking she began to do some gentle fascial work in my lower leg, asking me to let the leg melt down as she worked. (That’s something I would do!)

I tried, and could feel the resistance in my body. My Somatic Experiencing training tells me that resistance like that is containing something, usually something difficult, uncomfortable, probably something that once overwhelmed me and felt like it needed to be contained. I worked at it, feeling into that resistance while Sue continued to gently work my leg and foot.

I told her that there was a deep anxiety in that leg, and she agreed. She had me lay supine on the table for a bit more work, and in that position I continued to explore the resistance in my leg, the holding I could feel right up next to my bones. Gentle waves of sadness started washing through me; I mentioned them and Sue asked whether the knee had prevented me from doing things I would have wanted to do in my youth, or at other points in my life. “Yes, I suppose it did, but this feels more like vulnerability than loss”, I said. A couple of little tears worked their way out of my eyes, but I was maintaining curiosity, staying present with the desire to release my deeply anxious leg into a new way of supporting me.

Next she had me try a new exercise, a relatively simple hands-and-knees exploration of fine motor control in the hip, asking my femur to track straight back as I moved towards child’s pose with my sitz bones wide, and in trying to get there with her, I was suddenly completely overwhelmed with a distinctly young teenaged feeling of absolute confusion, fear, and misery. I was somehow facing my stepmom, the social realm, my own awkward existence and the need to justify it, and I had to stop the exercise to allow those feelings to move through me. Sue was kind enough to give me some space to do that, while remaining present enough that I didn’t feel abandoned or weird.

After a few minutes, I felt like trying again. This time, I could move into the exercise much more easily, the confusion and pain was gone, and my femur simply slid into place, going almost all the way down correctly where before I could only go about 25% of the way before being pulled off track.

That felt pretty huge to me. I have been abstractly aware for a long time that that leg contained some measure of my own sense of vulnerability, but being intellectually aware only goes so far. Having a skilled practitioner ask me to move in a very specific way that confused me, and allowing myself to experience my own vulnerability within that confusion, THAT might get me somewhat farther. I hope so, anyway; I’d really like to ride my bike to work again.